“Burning,” a Korean film starring Yoo Ah-in and Steven Yeun, was listed by Barack Obama as one of his favorite movies of 2018. On December 28, the former President of the United States released his list of favorite books, movies, and songs this year. On the list of 15 movie titles, director Lee Chang-dong’s “Burning” was named along with “Black Panther” and “Shoplifters.”

“Burning,” which was released in the local theaters in May, is based on the Japanese short story “Barn Burning” by Haruki Murakami. The film stars top Korean actor Yoo Ah-in and Korean-American Hollywood star Steven Yeun.

Despite its disappointing box office results in the home country, “Burning” was appreciated by many, being selected as the South Korean entry for the Best Foreign Language Film at the Academy Awards. 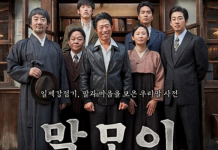