South Korea has officially ended their 2018 Russia World Cup journey with the victory over Germany. On June 28th (KST), South Korea beat Germany 2-0 during the group F’s final game at the 2018 Russia World Cup. South Korea’s Kim Young-gwon made the game’s first goal during the extra time in second half, and Sohn Heung-min soon made the second goal, which led the final score to 2-0.

Despite the glorious victory, South Korea can’t make it to Top 16 since they’ve lost twice during their games with Sweden and Mexico. In group F, Sweden and Mexico (6 pts) will continue competing in Top 16, and South Korea and Germany (pts 3) won’t be able to continue.

In the photo above, Sohn Heung-min is sharing the joy with team members after making the second goal. 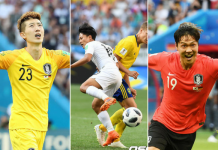 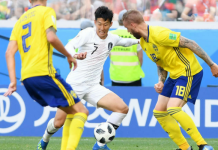 S.Korea Loses 1:0 Against Sweden With a Penalty Kick Awarded Through VAR 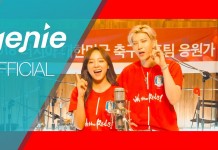 [M/V] VIXX Leo and Gugudan Sejeong Pair Up for World Cup Cheer Song ‘We, the Reds’