Actor Shin Dong-wook of “Dae Jang-geum Is Watching” is in hot water for the property lawsuit involving his grandfather.

On January 2, a media outlet exclusively reported that actor Shin Dong-wook’s grandfather claims to be defrauded by his grandchild. According to the report, he, who is now 96 years old, had passed on his land and house with the condition that Shin Dong-wook would do his “filial duty.”

However, the actor allegedly lost contact with his grandfather after obtaining the properties. The grandfather further stated that Shin Dong-wook’s girlfriend sent him a report to evacuate his own house.

To this, Shin Dong-wook’s agency Snowball Entertainment released an official statement, denying the claim against its actor.

“Shin Dong-wook is currently in litigation with his grandfather,” writes the statement. “The registration of property ownership was transferred according to the law and we’re waiting for the fair sentence by from the court.”

The statement went on to mention the actor’s family history, which pointed out the grandfather’s physical and verbal abuse against the family members.

“Claims made by Shin Dong-wook’s grandfather are false,” the statement concludes. “We express regret about the malicious use of media, just in time for his drama’s broadcasting. We will follow proper legal procedures, respecting Shin Dong-wook and his family’s wishes of an amicable solution.”

Shin Dong-wook made an acting comeback through “The Guardians” in 2017 after years of hiatus to treat complex regional pain syndrome, which is a rare disorder that is characterized by chronic, severe pain. He is currently acting in drama “Dae Jang-geum Is Watching.” He also has recently confirmed to star in tvN’s new drama, “Touch Your Heart.” 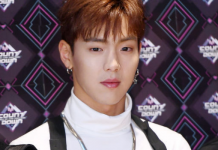