Korean-Canadian actress Sandra Oh has been nominated in the Emmy Lead Actress in a Drama Series category as the first Asian woman.

On July 12th, the 70th Emmy Award’s full list of nominations was announced. Among the list, Sandra Oh was nominated as Lead Actress in a Drama Series for her performance in BBC America’s ‘Killing Eve’. She is not only the first Korean, but also Asian woman to be nominated.

On ‘Killing Eve’ where she performs her first drama lead role, Oh performs a M15 spy, who chases after a psychopath female serial killer. Meanwhile, Sandra Oh was previously nominated 5 consecutive years from 2005 in Supporting Actress in a Drama Series category for her performance in ‘Grey’s Anatomy’. Yet, she never won the category. Therefore, this year’s nomination will be her 6th Emmy Award challenge.

Born as Canadian-American in Ottawa, Canada, Sandra Oh graduated from the National Theatre School of Canada in Montreal. After school, she first debuted through CBS’ television movie ‘The Diary of Evelyn Lau’ in 1994. After debut, she appeared on multiple movies and ultimately made a big name through ‘Grey’s Anatomy’. In 2005, she was also named on PEOPLE’s 50 Most Beautiful People.

The 70th Primetime Emmy Awards will be on September 17th at the Microsoft Theater in Los Angeles. 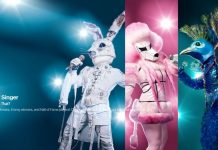