Ryu Jun-yeol answered the question about his girlfriend of 3 years, Hyeri. On January 25, Ryu Jun-yeol had an interview before the release of his recent film, “Hit-and-Run Squad.” Although it was about the upcoming film, he couldn’t avoid the question about his romantic relationship with singer-turned-actress Hyeri.

Since 2017 when they openly admitted the relationship, Ryu Jun-yeol and Hyeri have been dating. Fans got both excited and shocked about the relationship between them, especially because it didn’t come true in drama “Reply 1988.”

As the two celebrities are rarely spotted together in public, questions about their relationship come up often during public interviews.

Although they could find the questions uncomfortable, both of them did not hesitate to answer the questions. During the press conference for “Monstrum” last year, Hyeri shared how her boyfriend advised her with acting.

In the recent interview, Ryu Jun-yeol succinctly said, “The relationship with Hyeri is stable.”

Both stars have shown significant growths in each of their fields. As fans understand how their relationship is affecting them positively, they encourage the relationship to stay stable. 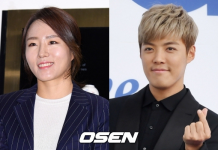