Home NEWS Entertainment Producer Lineup for “Show Me the Money 777” Including Gray, BewhY and...

“Show Me the Money” announces further lineup of producer teams for the upcoming season 7, which includes the winner of season 5 – rapper BewhY. On July 2, the show announced their first producer team, composed of rappers Swings and Giriboy. At the time, the program’s production staff showed much confidence by saying, “Swings and Giriboy are two artists who have the ability to lead South Korea’s Hip Hop scene. Furthermore, they are one of the teams that contestants have shown much preference.” Deeflow is the CEO of one of the major Hip Hop labels in South Korea, VMC. He is known for producing a hit track “Jakdu” and 2015 album “Yanghwa,” through which he had shown his distinct sound. In response to the news announcing his participation in “SMTM,” Deepflow said, “I want to discover a young talent. Through “Show Me the Money 777,” I am interested to find out what kind of new sound I will get to hear, that I’ve never heard before in my life.”

In addition, the runner-up of “SMTM 6” Nucksal decided to join the program. But this time, he will appear not as a contestant, but as a producer. Nucksal said, “with Deepflow, I know I’ll have a lot of fun while participating in this contestant. I will try my best to produce music with new sound and new style.” The third producer team “SMTM 7” revealed was a collaboration between BewhY and Gray. This is not the first time these two artists worked together on the show; they first met in season 5 when Gray acted as BewhY’s producer to help the rapper get his much-deserved win.

BewhY, after earning the public’s trust and support by winning season 5, released many hit tracks and continued to thrive as one of Korea’s best rappers. This time, he has made alliance with producer Gray, in order to help the contestants, just like he had received help several years ago.

Meanwhile, “Show Me the Money 777” aims to begin airing in September. Who do you think will win this season? 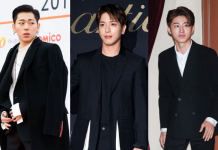