For a very long time, Park Hae-Jin had politely rejected all big-scale gifts from his fans. He argued that accepting these gifts are contradicting to his values and had returned all high-priced gifts from fans.

In addition, he even paid for the fan meeting to celebrate 10th year of debut, so that fans could attend without paying a cent. The fan meeting consisted over 4000 fans, and Park Hae-Jin managed to pay all cost out of his own pocket.

However, the stubborn actor has finally started to accept food trucks! Several trucks that contained various food, snacks, and drinks appeared at the shooting place of the upcoming drama, ‘Four Sons’. The trucks were sent by global fans of Park Hae-Jin, along with a placard, banner, and stickers with the actor’s face on them.

The fans insisted that since drama ‘Four Sons’ is unlike other dramas and require lots of energy and complicated technology, the staff and the actors needed something to supplement their lost energy. It was reported that even though they were rejected several times, the fans continued to insist that they send the food trucks in support of their actor, Park Hae-Jin.

Thus, Park Hae-Jin finally accepted the gifts and did not forget to take pictures to thank his fans. 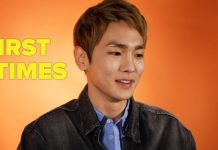