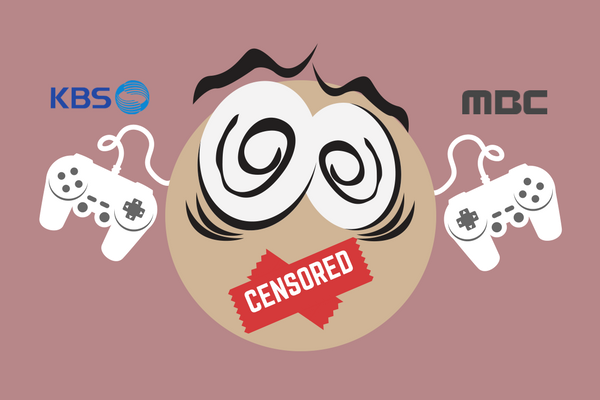 Lately, shows like ‘Infinite Challenge’, ‘Happy Together’, ‘Radio Star’, ‘I Live Alone’ and ‘Masked Singer’ have been discontinued.

Why is that the case?

Both Ko and Kim are accused of political meddling in media production—essentially using their influence to regulate and modify broadcasts in favor of the former Park Geun-hye administration.

The two are also accused of executing the alleged ‘culture and arts blacklist’ created under former President Lee Myung-bak, which contains selected names of entertainers, artists and journalists known for their outspokenness and progressive views. Those on the list were said to have been banned from broadcast appearances and media activities.

Currently, the workers are demanding more than just resignation. They are seeking justice for their mistreated co-workers, and the restoration of public trust in the media.

In Aug, the discovery of an ‘MBC blacklist’ led to increasing numbers of MBC reporters, producers and news anchors leaving their desks in protest. Similar to the ‘culture and arts blacklist’, the ‘MBC Blacklist’ categorized and evaluated journalists in terms of their loyalty to the company. Some were unfairly transferred to unrelated positions or fired as a result.

“No matter how talented someone is, they cannot appear on the show if the CEO disapproves. Our programs get taken down no matter how good the viewer ratings are. They’re telling us abandon our own ways of thinking and censor ourselves—to become slaves, not producers,” the letter said. “Our current state is so pathetic, it’s laughable.”

Despite ongoing investigations, the unions’ outcry was met with cold responses from the upper management of the two broadcasting companies.

KBS stated, “A strike would be illegal because it’s unrelated to working conditions.” MBC stated that a strike would bring broadcasting under the control of the government. It said that the company would “defend the independence of broadcasting against political forces and labor unions.”

Ko and Kim have yet to step down from their positions.

Why is this all happening now?

The investigation into former President Park Geun-hye’s corruption scandal led to the discovery of an alleged blacklist early this year. One version of Park’s blacklist was said to have listed over 9,000 people, including well-known ‘Oldboy’ director Park Chan-wook and ‘Snowpiercer’ actor Song Kang-ho.

Further investigations then led to suspicions of a ‘cultural and arts blacklist’ created by the Lee Myung-bak administration. In response, the National Intelligence Service of Korea (NIS) announced that they would expand their investigation of Park to include the Lee administration.

As the public grows increasingly aware of past corruptions, the need for reform grows painstakingly clear.

The Long Controversy Behind Government-Media Relations

Both KBS and MBC labor unions held a joint-strike back in 2012, which resulted in the then-CEOs stepping down from their positions. Soon after, new CEOs were appointed by the Lee administration.

The government operates broadcasting companies and has been throughout the late 1900s.

A few years after the Korean War, Park Chung-hee forcibly took office and extended his rule by declaring martial law. During that time, the press faced suppression and heavy censorship. Out of the 916 press companies that existed, only 81 survived President Park’s rule.

Korean civilians continued to suffer long years of military dictatorship. President Chun Doo-hwan’s regime dismissed protests for democracy and demanded loyalty from the citizens and the press. Daily broadcasts exalted Chun’s past and his accomplishments, and put on grand displays of his patriotism. After the Gwangju Massacre, a student-led protest that resulted in the bloody deaths of thousands of civilians, Chun continued to suppress the right to free speech. One way he did this was by forcibly merging smaller press companies with larger government-sponsored broadcasting companies. Current President Moon Jae-in assigned the new chairman of the Korean Communications Commission, Lee Hyo-sung, to “protect the independence and freedom” of the media by identifying those who collaborated with the former Lee and Park administrations and stripping them of their positions.

However, purging will mean little to nothing unless media laws change to prevent government interference in media production.

The Park administration faced criticism for its poor response to a national tragedy during the Sewol Ferry disaster in 2014. At that time, MBC allegedly broadcasted that the students had all been rescued when reporters at the scene said that more than 200 people were trapped inside. Both KBS and MBC faced public criticism for their inaccurate reporting and lack of on-site coverage. The news instead praised the government’s aid in rescue efforts and underplayed the severity of the disaster.

The two broadcasting companies also allegedly conspired with the National Intelligence Service of Korea (NIS) under the Lee administration to put out biased information in favor of the government. The NIS interfered in news, drama and radio by controlling personnel decisions, eliminating programs, and modifying the wording on broadcasts.

Unfortunately, more incidents similar to the Sewol and NIS scandal may occur in the future. As long as the government holds power over press decisions, accuracy in the future reporting of these events will be jeopardized.

The media needs to maintain independence from the government in order to serve the public and protect workers from persecution. Media laws must change and broadcasting stations must be able to fill in executive positions independently.

However, media laws cannot change unless the old systems of media also change.

Kang Myung-koo, author of “Media Power and the Pedagogic Public Sphere in South Korea”, revealed an irony in Korean media. “Allegorically, journalists who are supposed to report soccer matches, have decided to participate in the game due to their dissatisfaction with the players,” he said.

Although the government must let go of ties to the press, the press is also responsible for upholding accuracy and presenting information in a way that promotes discussion. Instead of ‘defending the freedom of speech’ by pointing fingers and publicly shaming the president and their executives, a discussion needs to take place within companies. Perhaps a long-due discussion on the role of the press and objective reporting would be a good place to start. Readers must also be engaged in the discussion in what the press can do to better to serve the public.

If not, history will only repeat itself.