As unbelievable as it may be, the 2010s will soon be over in just 10 short months! Kpop has had exponential growth in the last few years, which will also determine Kpop’s future for the following decade! The hallyu wave aka Kpop wave has definitely become more globalized within the last couple years. There is no doubt that in 2019 there will be more Kpop fans as more Kpop idols (BTS, Monsta X, NCT, Oh My Girl, Red Velvet, Blackpink, Sunmi etc.) continue to promote abroad. Especially in the US, thanks mostly to BTS’s success paving the way for Kpop growth this year.

Hollywood is the Kpop market for this year

Based on previous patterns of Kpop idol groups like Wonder Girls, Girl’s Generation, Super Junior, TVXQ etc. many Kpop idols usually extend their fan base to other countries in Asia before pursuing Europe & the Americas. Kpop’s growth in other countries are indeed significant, but given US is home to global names like Beyonce, Taylor Swift, Lady Gaga, Ed Sherman, Chris Brown, Drake, Justin Timberlake etc. (as well as Kpoplove’s headquarters) Kpop’s future global outlook will focus on the US market for this article.

Just 5 to 10 years ago, prior to BTS’s historical invasion in the US, Kpop was just a new and upcoming genre in the US that originated from a small country in Asia. As a decades old Kpop fan, I can personally attest to instances in the past where people confused North and South Korea and probably couldn’t name any Kpop artist even if their life depended on it.

Other idols’ success in the US

However, this does not mean Kpop has never made its mark in the US. Examining only the idol groups who are no longer “active” meaning either disbanded or no longer actively promoting with all members, idol groups like Wonder Girls and Girl’s Generation have previously tried to break into the US market without as much success as BTS.

JYP’s Wonder Girls (2007-2017) released a single- ‘Nobody’ (2009)- that was No.76 on the Billboard Hot 100 chart as the 1st Kpop group on the Billboard charts. This provided the opening for the group to enter the US market and pursue international activities. Wonder Girls can be considered to have been at the peak of their career in Korea (and Asia) prior to moving to the US in 2009 to focus on US activities. However contrary to expectations, Wonder Girls was unable to continue their momentum and ended up with changing the line-up and regroup back in Korea.

SM’s Girl’s Generation (2007-present) released a single-’The Boys’ (2012)-officially debuting and promoting in the US a few years after Wonder Girls. Comparing various aspects like promotions, fanbase, hallyu wave’s influence and method, there are so many differences that can explain the different levels of success between the 2 girl groups.

Taking a closer look at how BTS did not need to promote in the US to have the biggest US debut stage of all in 2017 as the 1st Korean group to perform at AMAs, BTS clearly did something that sets them apart from others. Not to mention BTS performed in Korean while Wonder Girls and Girl’s Generation performed in English. Based on BTS’s sucess, BTS’s momentum can only be expected to grow further this year.

BTS’s significant role for Kpop mainstreamed in US

In 2019, there are very few individuals who wouldn’t know what the 3 letters “BTS” refers to in the US. Even if one is completely clueless about Kpop, there is a big chance someone’s family, friend or acquaintance is a BTS fan or BTS ARMY.

Similar to BTS’s predecessors (e.g. legendary Kpop idol groups Girls Generation, Super Junior, TVXQ), BTS became mainstream in Asia a few years ago and became more globally recognized as they made their mark on the Billboard charts in 2015. But unlike other Kpop groups, BTS didn’t make any special plans to promote in the US market soon after their first placement on the Billboard charts. Instead BTS continued to release more content and focused on their music letting time to gradually increase their popularity all over the world.

Why is BTS different?

BTS contributed to further spreading the hallyu wave rather than having to focus on establishing the Kpop wave. Currently in 2019, nearly everyone has a smartphone as opposed to 10 years ago. Internet is easily accessible to many age groups enabling the daily use of social media like Instagram, Twitter, Facebook, Youtube etc. This has allowed Kpop idols, especially BTS, to focus on interacting with fans and growing their fanbase. BTS members are well known for being very active participants as singers-songwriters within the Kpop industry and renowned for sharing many of their content on SoundCloud or V Live which played a significant role for BTS’s success today.

BTS’s timing may have been what led to BTS’s breakthrough to becoming the biggest Kpop group in the world. Rather than jumping on the first signs of opportunity to pursue international activities, BTS bided their time to focus on their work and to further nurture their talents while waiting for their hard work to come to fruition.

As a result, BTS was able to become a household name is the US even prior to their official debut on the American Music Awards in 2017. Afterwards, BTS continued to set more records on the AMAs, Billboards, Youtube, iTunes, Ebay Korea, Forbes, Time Magazine, Bloomberg etc. in 2018.

When BTS had their 3rd world tour last summer, Line Friends x  BT21 also officially opened their pop-up store in LA situated amongst Hollywood’s Walk of Fame. As someone who has accompanied various people to this store in August, September, October and December of last year, I can personally affirm the lines were unbelievably long not only when the pop-up store first opened but also for the following months. Amazingly, the lines did not really decrease much every time I had to go.

There’s just too many things to love in this city, so we decided to stay here longer!?
That means…LINE FRIENDS Hollywood Pop-up store operation will extend until January 2019?
Please stay tuned for exact dates on the notice page of our website!#LINEFRIENDS #BT21 #HOLLYWOOD pic.twitter.com/WI3yzgK5NS

Most of my experience at this store consisted of standing in line for hours while conversing with other people accompanying their niece or cousin to the store. As to why the lines didn’t decrease much even after BTS finished touring in the US would be since BT21 items were often sold out with limited quantities, unpredictable shipments of new items, new seasonal (Halloween, Christmas) items and such.

Initially the Line Friends store was announced to stay for 3 months. Later, due to high demand, the pop-up was extended to January 2019 with plans to locate permanently. Just the fact that BT21 became popular enough to become a permanent store in LA speaks volumes about BTS’s success in the US. Aside from BT21, BTS is renowned for increasing sales for many associated businesses leading to the birth of the term “BTS effect” from major news outlets as many profit from BTS’s influence. BTS has become symbolic as a guaranteed catalyst to enhance micro and macro economics.

Just within 2 months of this year, there have been so many appearances or scheduled appearances of Kpop idols and artists in the US. Just to name a few upcoming events- Girl’s Generation’s Tiffany will be having her first showcase as Tiffany Young in a few days, Sunmi will be having her first world tour next month, BLACKPINK will be at Coachella in April and BTS will be touring the US again in May. Additionally, Red Velvet, Oh My Girl, Hong Jin Young and Dean have already performed in the US within the last 2 months.

BLACKPINK made their official US debut on “Good Morning America”  and announced their North American Tour during the interview just awhile back. With so many activities planned in the US for the first half of 2019, many are wondering whether BLACKPINK will be able to have success similar to BTS. There is definitely a lot of potential but as previous idol groups like Wonder Girls and Girl’s Generation have proven, it isn’t easy to accomplish.

As an avid Kpop fan whose biases are mostly the first generation of Kpop idols, I can’t help but feel happy and excited to see how well Kpop is doing in the US. There are many idol groups who have also contributed to Kpop’s success like Monsta X, EXO and annual events like KCON LA or KCON NY. But amongst everything I have read, seen and heard, I want to credit BTS for really opening the door wide open for Kpop to take on the US. There have been many attempts but no one has been as successful as BTS and thanks to that, I think Kpop fans are able to have more opportunities to see their favorite Kpop idols shine for Uncle Sam.

All I could hope for would be that BTS’s continuous momentum ushers in even more opportunities for other Kpop artists to enter the US market. Till the day Kpop can be heard on various iheart radio stations in the US, “Hwaiting” to all Kpop artists! 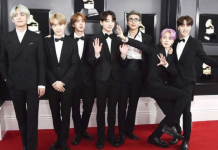