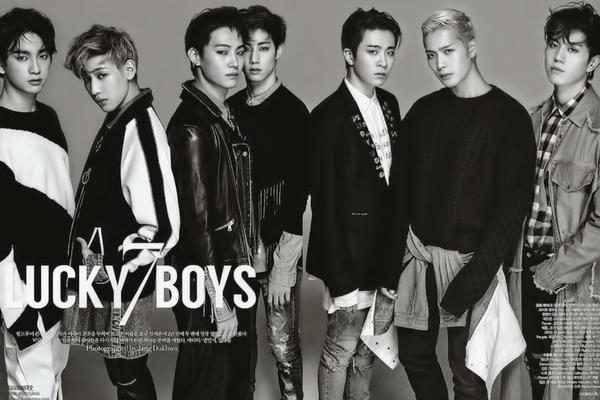 7 for 7 marks the seventh album from the internationally popular boy group, GOT7. This album, its name, concept, and member involvement,  illustrates and represent the members, their growth, and history.

However, the album and its promotion also highlights glaring and reoccurring issues with their agency that could lead GOT7 to become obsolete.

A seventh album created with member participation, three years in the K-pop music scene, and backed by one of the biggest entertainment agencies in South Korea. Overall, GOT7 has all of the elements to paint picture a group that is hugely successful in South Korea. But looking at the reality of their performance paints a different picture.

GOT7 is the only boy group produced by one of the “Big Three” entertainment agencies (JYPE, SM, YG) that has not reached critical mass domestically in South Korea. This fact is further underlined by the group’s non-existence presence on South Korean music charts outside of their promotion periods for new albums. Following this further, they have yet to take the no.1 spot on South Korea’s most popular and used music streaming service MelOn.

These aspects  of GOT7’s performance history points to a much more maligned problem: their agency and their subsequent management. JYP Entertainment (JYPE) has critically mismanaged GOT7 in some key aspects including their identity building, public image, and most importantly their music.

“You Are”, the title track for the 7 for 7 album is the beginning of a new era for GOT7. The title track contains a bright fresh image and sound that is reminiscent of the summer 2015 hit “Just Right”. Conversely, the song also manages to express the emotional maturity and nuance seen in sub-unit JJ Project’s Verse 2 album that came out in July.

Notably, JJ Project can be considered the core sub-unit of GOT7; current group leader JB and Jin-young debuted as JJ Project in 2012, two years before reorganizing as members of GOT7 in 2014.

This title track is widely liked by fans of the boy group. The album, conceptual growth, and developing musicianship continue to be praised by fans and a few critics alike. Indeed, the member’s abilities to write music, create their own choreography, and connect with fans has improved over the years in comparison to their debut in 2014.

With fans’ support, the song reached the no.1 spot on three different charts and retained the position for a few days after its release. However, as of the writing of this article “You Are” is no longer in the top 100 of any major Korean music chart. The reason for this ephemeral presence on music charts is simple: the song is not good enough. In comparison to top charting boy groups  EXO, BTS, BtoB, and WINNER the song quality, execution, replayability, and distinctiveness are all below par.

Like all of GOT7’s past songs, JYPE staff chose “You Are” to be the title track. Company selection of the title track is not irregular — they have experienced staff members that have musical knowledge, training, and access to market research that assists them in making their decision. Unfortunately, we don’t have access to insider information on the exact process for song selection. However, we can assume that title track is picked because it is believed to be one of the best songs on the album, has a distinctive sound that is connected to the group, and is believed to have the best chance to gain popularity once released.

Part of the blame goes to the production team, including the members. Quality checks coupled with market research would assist in determining current and future trends that can help form the direction and sound of an album. This phase should iron out any awkwardness in melody, lyrics, tempo, delivery and song structure. Yet, the first three singles from the group “Girls Girls Girls“, “A“, and “Stop Stop It“, lacked a bridge — a basic component of song structure. But this isn’t the biggest component. You can have a bad song and still top a chart. A much larger part goes to building the identity of GOT7 that established them in public’s mind.

The day after 7 for 7 was released GOT7 sat down for in interview with a news site. During this interview a question was directed towards the group. The interviewer mentions that although GOT7 is a very capable group, they don’t get a lot of attention in Korea and asks the group why this may be the case. In response to the question, JB explains that “For GOT7, there is nothing that says precisely and clearly ‘This is GOT7’.” In other words, GOT7 lacks a distinctive brand that the public can easily associate the group with.

This lacks of a clear sound and image can be clearly seen in past releases. For their debut in 2014 GOT7 were marketed as a hip-hop, performance heavy boy group by JYPE with the release of “Girls Girls Girls”. However, after that release the group released “A”, a bright pop song, then transitioned to a heavily auto-tuned R&B song with “Stop Stop It” by the end of the year. Moreover, in 2015 the group made a summer comeback with “Just Right”, that was characterize with a sweet, bright, and innocent concept. A month later GOT7 returned with “If I do”, a dark and masculine concept that borrowed sounds from earlier eras of rock and R&B. The following year GOT7 began their Flight Log album trilogy that covered songs that heavily mixed EDM, hip-hop, R&B sounds. Now, “You Are”, returns the group back to the pop genre.

GOT7’s versatility and ability to navigate these different concepts and styles should be acknowledge and applauded. Few groups vary there sound as much as GOT7 has. However, this versatility is a double-edged sword by prevent GOT7 from establishing and marketing a sound that can definitively associated with the group. This is whole an error made on the part of JYPE.

Furthermore, not only did the agency fail to create and produce songs that with a consistent sound or feel, but they also fail to promote GOT7 properly. For every comeback GOT7 will appear on 2-3 different radio talk shows, appear on “Idol Weekly”, “After School Club”, have a few photo shoots and interviews with prominent magazines. These are in addition to the expected performances on music shows and perhaps a few festivals. Beyond this GOT7 rarely appears on other shows and as a result fail to be seen by the public as much as their competitors.

As the pick of shows narrows due to ongoing strikes at MBC and KBS, including the cancellation of the popular “Infinity Challenge”, it is extremely important and should be easier, to be featured, guests. If GOT7 as a group or an individual members fails to expand into the larger entertainment field they risk ending up like label mates 2PM, Wonder Girls (disbanded), Miss A (on hiatus), 15& (on hiatus), 2AM (on hiatus) and more. There are or were otherwise extremely promising groups that lost popularity domestically or have not been active for years.

This comeback period marked the first time since 2015 that GOT7 failed to win an award from any of the major Korean music shows. The possibility of a win was marred by insufficient album stocks provided by JYPE to stores and the ever-present challenge of streaming and downloads.

Hopefully, the failure of this comeback will push the members to rethink their position at JYPE to either renegotiate their management and representation by the company or to leave it outright. With their contracts set to expire next year it will be the perfect time for something to happen.

Whatever the case may be, we can be sure that GOT7 will continue to make music and be great friends well into the future.