The newly launching variety show is bringing radio shows to every corner of the peninsula. On March 13, “Show! Audio Jockey” production team and cast members made appearances at the press conference. Including the head producer Lee Young-joon, Sung Si-kyung, So Yoo-jin, Boom, and Monsta X members attended. Park Myung-soo did not attend the press conference due to the schedule conflict.

Lee Young-joon introduced the members, who show a wide variety of appeals. “I wanted to produce a radio show, but tvN does not have a radio station,” the producer opened his mouth. “So I thought about visualizing radio shows. Boom came into my mind first. So Yoo-jin, too, hosted a radio show for 7 years, not to mention that Park Myung-soo and Sung Si-kyung are known as great DJs.” So Yoo-jin is to host a radio show titled “Sweet Salon,” where she will talk about cooking and raising children. “I’ve always wished to come back to radio,” she said. “I wanted to show something so I chose cooking as one of the themes. I was really nervous about it, though.”

Monsta X members also had experience in radio on Naver V Live. Kihyun said, “I was nervous because the co-stars are so famous in the field. We focused on the interaction with the audiences. We’re thankful of those who participated.”

While Sung Si-kyung said his main focus was on the radio show itself, Boom said he tried to show something he couldn’t through the radio. Lee Young-joon emphasized how “Show! Audio Jockey” is different from “My Little Television.” “Even if one does not watch the show on TV, the radio shows are the complete forms of entertainment as they are.”

The producer also opened up the possibility of new members. He also added that special guests are to make appearances. 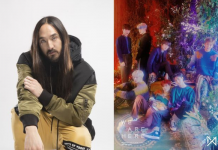