Korean YouTuber Yang Ye-won, who is currently managing channel “Beagle Couple” with 181 thousand subscribers, confessed that she is a victim of sexual crime.

On May 17, Yang took on her social media to open up about her victimhood. In the video and a lengthy letter she shared through YouTube and Facebook, Yang speaks about an incident she experienced in her early twenties.

“I applied for a part-time job as a fitting model, dreaming and studying to become an actress,” writes Yang. “I visited a studio, where I felt good about compliments they said about my appearance.”

“I told them that I want to be an actress and the manager there told me that he would connect me to directors and take profile pictures for free. I was deceived by that and signed a contract that the manager handed me.”

Yang continued to tell what happened at the studio. “Later I went back to the studio for the scheduled shooting, where the manager locked the door with a lock. In the studio, about twenty men were there holding cameras in their hands while smoking.”

“The manager gave me underwear which I’ve seen only in porns. I said no, but the manager threatened me that he would sue me for financial damages,” she painfully continued. “Twenty elderly men surrounded me and requested to pose one by one.”

After sharing details about what happened at the site, Yang says, “I found my pictures uploaded to a port site on May 8.”

“Some people even sent screenshots of such pictures to my boyfriend through Instagram direct message. I wanted to die.”

However, she chose to stand up and ask for help after finding similar pictures of other women.

“I found a familiar face there, who used to dream about being an actress with me,” says Yang. “She was tricked the same way and just like I was, she also was living in a tremendous fear.”

“I am a victim. I didn’t want any of that, I was so scared, and even now, I just want to kill myself. I know there are more victims and the number must be increasing even at this very second. Don’t blame them,” Yang adds, asking people to spread her video and the letter so that such victimization is not repeated.

Yang Ye-won is a YouTuber who shares vlogs with her boyfriend. Since her confession, several people have confessed their victimhood of similar sexual assaults. 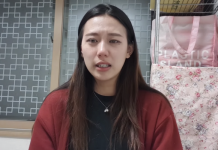