While actor Yoo Ah-in was in hot water for recent “zucchini” controversy, promotional posters for his upcoming film “Burning” were found with papers covering his faces.

On May 8, several Twitter users shared pictures of movie release posters for upcoming Korean film “Burning.” From the pictures, one can notice that the face of a particular actor has been covered with a paper.

The close-up picture makes it clear that it is Yoo Ah-in whose face has been covered. The paper says “What?” with numerous question marks continued throughout the page.

“Posters and promotional prints for Zucchini’s upcoming movie had been distributed to a women’s university and taken back in half a day after students censored his face,” said one of the Twitter users. “Zucchini” is a disgraceful nickname the actor obtained when he was involved in a feminism debate a few months ago.

In November last year, a Twitter user wrote, “I think it would be hard to be friends with Yoo Ah-in. It’s like, when he opens a refrigerator and finds a single zucchini in there, I think he would just stare at the zucchini for a while, turn to me, and say things like, ‘What does it mean to be alone?’ (*twitching*)” The actor replied to the post himself by writing, “Have you been hit by a zucchini? (*twitching*)”

People soon pointed out that violence against women should never be a source of humor. The debate continued and Yoo Ah-in exchanged more than a hundred Tweets with Twitter users. When one of them referred him as a “typical Korean man,” the actor emotionally answered, “Stop acting like Megalia,” referring to a radical feminist group in Korea.

Many Korean women, especially those who support feminism, turned their backs against the actor after the incident and their stubborn position seems to be carried out in action. Especially as women’s universities house more proportion of feminism supporters than other environments, students did not hesitate to express their will to boycott Yoo Ah-in.

Following the original Tweet on May 8, other Tweeter users, too, started to share similar pictures showing Yoo Ah-in’s face covered with papers or other prints.

“Burning,” an upcoming Korean mystery drama film starring Yoo Ah-in and Steven Yeun, will be released in local theaters on May 17. 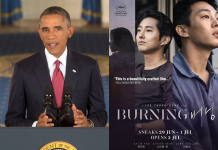 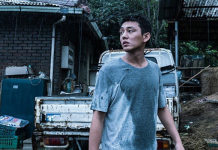