Actress Kim Yoo-jung is to co-host “100 Years of Spring” with singer-turned-actor Jinyoung. “100 Years of Spring” is a commemoration event that celebrates the 100th anniversary of the national holiday on March 1. The event, which will be held on February 28, will be co-hosted by Kim Yoo-jung, Jinyoung, and announcer Jo Chung-hyun.

At the event, Kim Yoo-jung is reuniting with Jinyoung. Both stars acted in the Korean drama “Moon Drawn by Clouds” a few years ago.

“I’m excited to participate in such a meaningful event,” said Kim Yoo-jung. “It is a cultural festival, so I want many people to share the joy.” 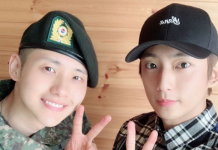