On November 6, CJeS Entertainment reported, “Kim Junsu, who returned to the society yesterday after serving in the military for the last 21 months, has confirmed to host his comeback concert. From November 30 to December 2, the singer will be hosting “2018 WAY BACK XIA CONCERT” and greeting fans for the first time since military discharge.” The day prior, Kim Junsu was discharged from the military. After enlisting in February, the singer spent the next year and 9 months serving at the special promotions unit of the Gyeonggi Nambu Provincial Police Agency. When he finally returned to the society, he said, “I would like to sleep and I would like to travel. But above all, I know how much my fans have waited for my return and I want to get up on stage and meet every one of you.”

A representative of the singer said, “Kim Junsu’s last concert was in 2016 before he enlisted in the military. To pay back the love he has received while serving in the military, the singer has prepared a present for his fans. He plans to perform the tracks from his 1st to 4th studio albums during the concert. We expect the ticketing to be as competitive as ever, just as we saw how excited the fans were about Kim Junsu’s return yesterday.” 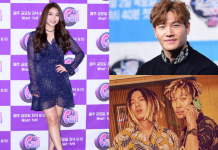