On May 11, H1GHR MUSIC released a funny video clip showing CEO Jay Park recruiting Kim, on its official social media channels. Notably and hilariously, Park asks Kim which rappers under the label he likes. In response, Kim names almost every rapper except Jay Park resulting in a hilarious situation. Even funnier is how awkward they are together.

When “High School Rapper 2” ended last month, news emerged that Kim was discussing a possible contract with the label. However, later that day H1GHR MUSIC confirmed they were in contact with the rapper, but also mentioned that they had not established anything yet.

Moreover, earlier this week AOMG, another independent music label founded by Jay Park, announced that would be introducing a new member. Many speculated that they would be introducing HAON, but the label denied this. Instead, they introduced UFC fighter Jung Chan-sung.

Meanwhile, Kim demonstrated rap skills that dominated the competition of “High School Rapper 2” leading many to wonder where he would go afterward. Now that he is officially signed to H1GHR MUSIC, he joins such artists as Groovy Room, Woodie Gochild, pH-1, Sik-K, and more.

Further, in a statement regarding the recruitment, a label official said that they will “provide full support” to develop Kim into a hip-hop artist representing Korea. HAON is reportedly working on his debut single with the aim of releasing it this month. 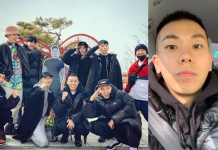 AOMG Music Family Gathers to Send Loco Off to the Military