The May 3 issue of High Cut Korea features actor Ha Jung-woo walking through old alleys, leaning against stone walls, and relaxing in ancient squares in the small city of Tuscany, Italy.

Fittingly, Ha is dressed like an Italian gentleman. Some of the standout pieces include a beautiful fitted blue linen suit jacket. The jacket is paired with a pristinely white dress shirt and pants creating a nice contrast.

More, in another picture, the actor sports a dark beige suit with a dark tie and light grey single-breasted suit paired with a navy striped shirt. Of course, all the outfit have that signature “Italian tailored” looked. Notably, the clothing matches the actor with a sexy yet mature vibe.

In the accompanying interview talks about his extraordinary success with both Assassination (2015) and Along with the Gods: the Two Worlds (2017). “I am grateful” Ha revealed, recalling how elementary students called him by name the other day.

However, the recognition should not be surprising considering he has starred in over two dozen films. Furthermore, Ha has also won the best actor award six times. In addition to the two films mentioned above, Ha Jung-woo has also appeared in 1987: When The Day Comes (2017), The Handmaiden (2016), Tunnel (2016), The Berlin File (2013), and The Yellow Sea (2010). 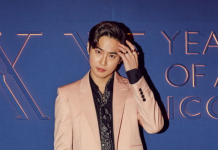 EXO Suho Shows of Luxurious Style While in Rome for Event 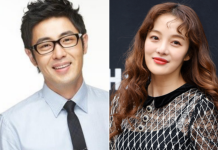