Big Bang Seungri’s club, Burning Sun, has been surrounded by lots of controversy. Now, the first informant of the incident just broke his silence on his social media account.

On March 10, the first informant of the Burning Sun controversy-Kim Sang Kyo, broke his silence on his Instagram account. The article reports Kim Sang Kyo posted moments after news broke of Seungri now considered as a suspect for the sex scandal at Burning Sun.

The informant reposted the news headline about Seungri booked as a suspect and added a few words to share his own thoughts, ‘next will be the police.’

Informant Kim Sang Kyo’s role in the Burning Sun controversy is reported to have started when Kim shared he was assaulted by both security and police when he tried help a female who was being dragged away by an employee back in November 2018. With this start, other allegations including illegal drug activity and prostitution made the headlines. Currently Seungri is no longer a member of Burning Sun‘s board of directors and the club has been permanently closed for investigation. 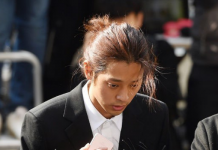