Home NEWS AOA’s Choa Announces She Is Leaving the Group On 22nd, Choa wrote on her Instagram: “After discussing with my agency, I have decided to leave AOA and cheer for other members from now on. Although I was the oldest girl in the group, I was still too young and there were many times I wanted to cry. I tried taking medicine to heal insomnia and depression and I also started having less schedules since two years ago. However, I realized it was not something that was caused by tiredness. Therefore, I eventually had to stop all my schedules.” 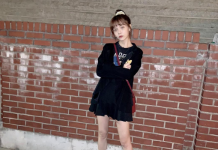