Actors from the upcoming war film “The Great Battle” show off their charisma through pictorials with High Cut magazine! Following the official release, the fashion magazine also revealed un-released pictures, from which actors freely showed off their charms.

During the interview that followed the photoshoot, Jo In-Sung shared a few thoughts about his character in the film. The actor said, “I tried to portray the figure with my own interpretation of a leader. Obviously, this isn’t the perfect definition of a leader because everyone has their own idea of what leadership is. However, I tried to picture a leader who is not as authoritative and someone whom we can see from everyday life.” Nam Joo-Hyuk, on the other hand, expressed his excitement about having filmed advanced action scenes. Nam said, “I was very happy while filming. Ever since I was young, I loved playing with toy swords. Now I got to do it for real, and I love filming scenes with lots of action.” Meanwhile, Park sung-Woong was asked about a common belief among the public that states whenever the actor is playing a villainous role, the movie is no doubt a hit. In response, Park said, “do I look that weak? To be honest, my character in “The Great Battle” is indeed very close to a villain, but I didn’t consider him as a villain while filming. Every one was stealing each other’s land during the time period that the movie was set. I just thought ‘let’s take it outside’ and attacked Yang Man-Chun (Jo In-Sung), but I got counterattacked instead.” Kim Seol-Hyun shared her first impression of Jo In-Sung. The actress said, “I thought the character Yang Man-Chun was very attractive with great personalities. In fact, I think the character is a lot like Jo In-Sung in real life. He committed to the movie with such a great leadership and responsibility, just like his character led the war in the movie.”

Meanwhile, the upcoming film “The Great Battle” will premiere on September 19. You can see more pictures and interview of the actors in the September issue of ‘High Cut.’ 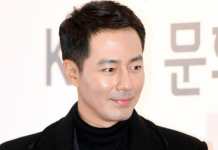