Actor Lee Jong-suk will take on his first narrator role for an SBS documentary exploring the changing social landscape of South Korea.

Having arrived back in South Korea after being detained at the Jakarta Airport, actor Lee Jong-suk is already working on a new project. For the first time since his debut, Lee will be a narrator.

Lee’s narrative role is for an SBS special documentary War of the Just (working title) which airs on the 11th. This documentary will explore this era’s social issues through the lives of young people. In particular, Lee was asked to do be the narrator because they feel he has a better connection with the film’s topic.

Lee is known for showing a vested interest in solving social problems in various ways. The actor makes consistent donations to various organizations to support the underprivileged. Moreover, although this is his first time narrating a film, the production team praised him. “Even though it was his first narration, he was not only calm but delivered [the narration] in a warm voice.” 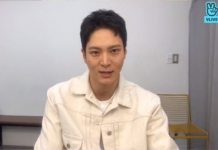