tvN’s new upcoming Sat-Sun drama “A Korean Odyssey” is written by the Hong Sisters (Hong Jung-eun and Hong Mi-ran) and produced by Park Hong-kyun. The story is a modern twist on the classic Chinese novel, “Journey to the West”. In their recent photoshoot, the actors posed next to their characters, wearing clothes that fit each of their unique personalities. Cha Seung-won posed with charisma in a daring suit that brought out his character’s overwhelming presence. The actor will play the “noble and gentle monster” Woo Hwi-chul (based on the Bull Demon King) who spends a thousand years in training to become a Taoist hermit. Oh Yeon-seo displayed her chicness through black slacks and a gray turtleneck and coat. The actress will play “the woman who can see monsters” Jin Sun-mi (based on Xuanzang). Her character is graceful and mysterious, and is represented by a lotus flower. Lee Hong-gi showed off his charming jokester side with a playful expression for his character poster. He is the “superstar monster” P.K. (based on Zhu Bajie, or “pig of eight precepts”) who uses his power to seduce women. Lastly, is Jang Gwang in his classy suit and old-fashioned gentleman’s necktie. He plays the president of a top tier finance company, and is known as the “youngest monster” Yoon Dae-sik. He is a courteous and heart-warming character that serves Son Oh-gong. 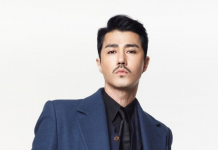 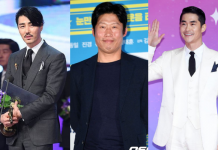 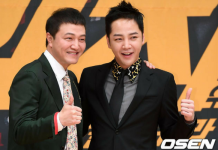