Is the summer heat treating you harshly? Here is the cure: turn on the air-conditioner, grab snacks, and binge watch Korean dramas until you run out of episodes to watch. Luckily, we have eleven new dramas starting next month, so you won’t have to worry about running out of things to watch.

About Her (working title)

My ID is Gangnam Beauty 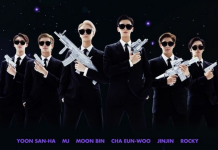